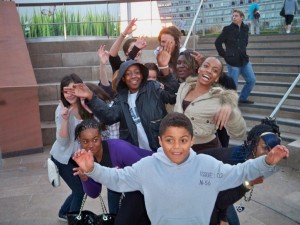 Charmaine: What did you learn from the experience?

Rochelle, 14: I learnt about what really happened to slaves. It made me really think about my identity and history.

Paris, 15: I took away a sense of the reality that was slavery. With all the facts and statistics, it was really informative with intriguing information.

Charmaine: What was the most important thing you learned?

Rochelle, 14: I agree with Abraham. I also learned that I shouldn’t take stuff for granted and that I should stay positive and aim high.

Subira, 15: Seeing the struggles that slaves went through has made me think. Now that I’ve seen what others went through and that some of them overcame their problems, I know I am in a stronger position.

Charmaine: What most surprised you?

Louisa, 13: Being in Liverpool was exciting. I had thought I wouldn’t see many people who looked like me but I was wrong! We met lots of people of different backgrounds and everyone was friendly and welcoming.

Paris: I didn’t know that slaves could be so young – that kind of upset me. But all through the visit, the chaperones kept reminding us that slavery was then and this is now. But I learned that there is still child slavery going on in some parts of the world which is so sad.

Rochelle: I think everyone found the museum visit emotional. I didn’t expect that any of us would cry but there were a few tears. I didn’t cry because I held it in. But we also had lots of fun and I’m glad I got to go on the trip with the others.

Louisa: It really opened my eyes. I think everyone learned a lot about the past but one of the best things which made us all happy was hearing about black icons since slavery who have done great things. It was motivating to learn about them. We had a great time.