2010 has almost come to an end, and what an eventful year it has been for all involved in Urban Synergy. It wouldn’t be right to leave the year behind without acknowledging our successes. Here is just a summary of what we’ve achieved, and a hint of what you can expect in 2011.

Urban Synergy achieved its goal of becoming a charity in November 2010, which will enable it to extend its services and benefit from charitable status. Charities generally pay less tax than non-charities – particularly Corporation Tax, Capital Gains Tax, Stamp Duty Land Tax on property transfers – and they can reclaim the tax from some donations given tothem. This means that as a new charity, Urban Synergy will be able to maximize monies donated from companies and private donors which in turn will have a significant impact on furthering the work that we do.

New Partners BPAP Come On Board

So where does BPAP fit in with Urban Synergy?

Lewisham’s Black Pupils’ Achievement Programme explicitly reflects our strategic aim to shrink the achievement gap of black and mixed heritage young people by 2011. BPAP’s aims are firmly embedded in the Children and Young People’s plan and the Equalities and Achievement action plan and are underpinned by the following objectives:

We have already undertaken several successful partnership activities with BPAP at Lewisham schools and a full programme of BPAP activities will be taking place in 2011.

This year has also been a year of pleasant surprises, and one who could certainly vouch for that is Leila Thomas, founder of Urban Synergy. In September, she attended the Race Equality Award ceremony thinking she was a guest, and walked away with a surprise leadership award. Leila had no idea she had been nominated, so the award was completely unexpected.

“There are several other worthy mentoring organisations but I’m delighted that the RfO board saw a spark in Urban Synergy and recognised us for our innovation and positive contributions to improving the lives of the young people we serve,” she said.

Well, they obviously think you deserved it as much as we do! Congratulations, Leila!

Mentee, Paris, does herself (and US) proud

Looks like Leila isn’t the only one gaining some well-deserved recognition. 2010 has been a prolific year for our mentee, Paris Thomas-Robinson. Paris gave a talk at the US AGM in April, detailing the positive effect US has had on her life. Not only had her academic grades dramatically improved, Paris also gained confidence to become a leading role model forother Urban Synergy mentees. Just last month Paris was acknowledged with a Black Youth Achievement ‘Choices’ Award. The award celebrates young individuals who have ‘made a conscious decision to make positive changes to their life.’ We have no doubts that Paris will continue to achieve excellence both personally and professionally; well done!

Urban Synergy knows how important it is for young people to have examples of successful individuals that not only inspire them, but also relate to them. Which is why we were delighted to introduce ‘Think Further’ seminars held at South-East London schools for the first time, to encourage 600+ students to think ahead about university life.

Guest speakers who were undergraduates or graduates from some of the UK’s most prestigious universities hosted the seminars, detailing the realities of university, and students went away feeling inspired. Many thanks to the wonderful students, the Head Teachers, teachers and support staff at Bonus Pastor College, Sydenham Girls School and Conisborough College.

Our busy programme of Academic seminars will kick off in the New Year. If you are a graduate or under-graduate and would like to tell your story at a seminar by volunteering to speak to students, please do get in touch with Urban Synergy for more details. We look forward to targeting more schools in the New Year!

Ding, dong, ending on a high… 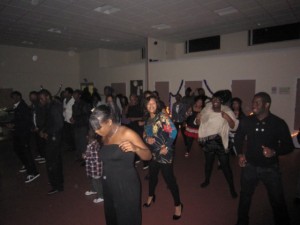 What better way to end the year than with a good old celebration – and that’s exactly what the Urban Synergy mentees did! We partied away in aid of Christmas, and it’s fair to say the mentees taught us older ones a few new dance moves. In addition to the fun and frolics, the first set of mentees accepted the role of Urban Synergy ‘Young Ambassadors’.

This enables them to pass on the baton to other youngsters, and to make a positive difference in their local communities. We are so proud of all their achievements and know they’ll have even more success stories in the New Year.

Thank you all for your support and we look forward to working with you in 2011!