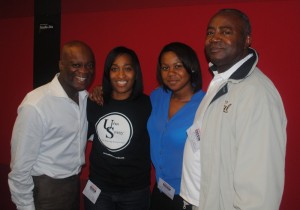 They went on air to encourage young people to join network support groups like Urban Synergy so they can get an open-minded, inspiring, successful person to work 1-2-1 with them as a Mentor.

This Mentor will help seek out and prepare them for opportunities such as further education, employment and work experience and also develop the Mentees positive networks containing accessible Role Models other Mentees from different schools in South East London.

Click here to hear the broadcast is available on BBC iPlayer (2:15 onwards) until Saturday 27th August.

In addition, a group of Urban Synergy mentees and Young Ambassadors were invited to appear on Reprezent Radio to talk about Role Models. If you want to listen to the broadcast, click here

They had this to say about the event:

[quote]On 23rd August, me and two other Urban Synergy Young Ambassadors, Paris Thomas-Robinson and Ibrahim Alase were invited to a radio station for young people called Reprezent. The presenters, Emmanuel and radio DJ Jamal, wanted us on their hour long radio show ‘Talkative’ to discuss the work of Urban Synergy, how us as Young Ambassadors got involved and our definition of a positive and negative role model. Soon after arriving at the radio station, we were quickly introduced to the presenters and as there were only two microphones for guests to speak one at a time, Ibrahim and I nominated ourselves to begin the discussion. At the beginning of the discussion, I began to feel the pressure of being ‘on air’ (I believe Ibrahim did too!). Emmanuel and Jamal’s live humour and banter made it very easy for us to be comfortable with the discussions. Ibrahim began to answer questions with little effort and confidently giving descriptions of what Urban Synergy are about and what they do. After the first break, Ibrahim and Paris traded places and the discussions continued. Paris immediately got involved in the discussion showing great professionalism, answering questions sharply even promoting Urban Synergy’s twitter and facebook details! The overall experience for us, as Young Ambassadors on ‘Reprezent Radio’ was a great. Everyone left on a high and full of confidence as everyone was pleased with our performance. Thanks Urban Synergy for this great opportunity!

Gavin, 16[/quote] [quote]On Tuesday 23rd August, as an Urban Synergy Young Ambassador, I was invited to accompany Paris Thomas-Robinson and Gavin Kamara to speak about role models at ‘Reprezent Radio’. It was quite ironic how we met up. The quote for the day was it’s “All in God’s plan”, according to Natasha. We got there eventually and got prepared for the radio show in quite a hurry (despite being late). It wasn’t long before we adjusted to being on the radio. Uncomfortable turned to comfortable. I took the lead in informing the listeners of Reprezent Radio what Urban Synergy is about (I’m a natural y’see so it came easy). Even ‘shy and reserved’ Gavin showed a more confident side as we pressed forward into talking about role models. I handed over the lime light to Paris in the second interval as there was a limited amount of mics to go around. We had a good time well… at least I did! Being with Jamal and Emmanuel and taking part in their live afternoon show – Talkative – makes me want to get involved in more discussions about things that affect our local community and the youth of today. Big thanks to Urban Synergy for providing us the money to feed us despite your tight budget.

Ibrahim, 16[/quote] [quote]On Tuesday 23rd August, as an Urban Synergy Young Ambassador, I was invited to accompany Ibrahim Alase and Gavin Kamara to speak about role models on ‘Reprezent Radio’s ‘Talkative’ show. We shared air time discussing with Presenter Emmanuel and radio DJ Jamal about the growing success and impact Urban Synergy is having within the community. We spoke about the services the 1-1 Mentoring Pool provides, how we are role models and what we are presently achieving.