Our Summer events programme continued with a visit to Parliament, Inter-generational volunteering at Pineapple Club and a visit to Thorpe Park. 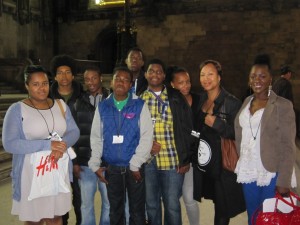 After the security check in via Portcullis House, our group were given an outline of the impressive building – which houses many of the MPs offices – and it’s architecture. Our guides were Diane Hedditch and Hannah Kinsey from Parliament’s Education Service Department.

The escalators down to the main Parliament building revealed amazing architecture and once in Parliament the halls art work depicted the many events in British history. We were given an overview on Parliament, the Government and how new laws are made. The tour continued into the robing room where the Queen is robed prior to appear in the opulent House of Lords and then into The House of Commons where our guides discussed the various actions of the MPS and their debating. 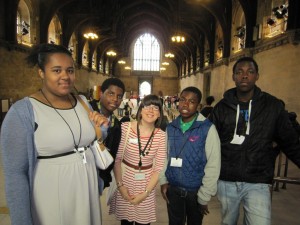 The tiny mikes in the centre of the room that carried the sound around the room were visible as were the mikes in the back rests of the seating to ensure everyone present can hear what is being said! The building was bustling with various others groups taking tours of the building and although hushed tones were in order it felt pretty relaxed and our mentees were able to ask questions and giggle at the funny side of some of the historical facts revealed by our guide. We were then led into the Central Lobby where members of the public can visit their local MP and voice any concerns they have. From the alabaster statues of Queen Victoria to past Prime Ministers, the building presented a feast of facts and historical information. The tour ended in Westminster Hall where many banquets are held and the Queen Mother once lay in state.

Fact – there is a hidden toilet in the House of Lords which is for the Queen’s use only . It is the first flushing toilet ever to be built in the UK.

The first Black Briton to vote in a British election circa 1774/1780 was Ignatious Sancho, a composer, actor and writer. 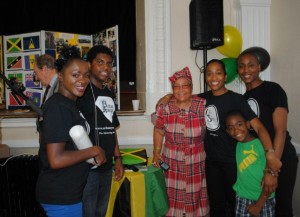 Urban Synergy mentees took time out of their summer activities programme to volunteer with the older generation for two days at the Pineapple Luncheon Club in Anerley Town Hall.

Day one on Thursday 9th August was an introduction to the guests at the club which runs on a Thursday and Friday of each week. The following week would be a celebration of Jamaica’s 50th Year of Independence which the club was warming up towards.

The young people needed little encouragement to get chatting and some could be seen engrossed in conversation with someone who could have been their own grandmother!

As the music kicked in in the background and lunchtime approached the young people were instructed on how to assist with serving lunches and beverages and generally working with the regular staff to clear tables and help with the washing up.

The room was buzzing with chatter and Urban Synergy staff and mentees joined some of the men – and women – in a few rounds of domino’s.

It was late afternoon when the Urban Synergy volunteers were invited up to the mike to feedback to the group their experiences from the day. It was agreed that all had a positive experience and that linking up with the older generation in this way certainly helped to bridge the generation gap! 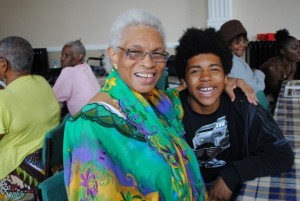 Day two on Thursday 16th August saw the mentees arrive at 10am and get straight to work decorating the hall in time for the arrival of guests to celebrate Jamaica’s 50th Year of Independence. Tables were laid with utensils and party poppers and the walls with posters celebrating the 2012 Jamaican Olympians together with a history wall with posters of the first arrivals from Jamaica to the UK on Empire Windrush. The mentees busied themselves serving lunches, clearing away and then settling down to watch the guest performances during the afternoon which included dancers and a jazz trumpeter playing songs of nostalgia.

All in all the mentees got a real lesson in history from their two days at the club and said they really enjoyed the experience despite some of the hard work involved!

Safia said: I think this activity was good because as young people we don’t usually get to interact and get to speak to older people. it was also nice just to help out and take the strain off of some of the worker there.

Lenny said: I learnt a lot about how important it is to just help around when it is needed. I chose this activity because respect is required when spending time with the older generation. 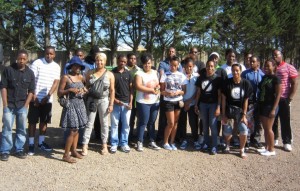 The Urban Synergy Life Enrichment Skills Summer Activities Programme ended with a bang this Saturday 18 August as a team of 27 young people, staff, cohort leaders and mentors took the coach to Thorpe Park for a day of fun and sun.

The annual trip marks the end of the Summer programme before the young mentees return to school for the start of Autumn term.

The coach was so comfortable that many had snoozed off but upon arrival at the park everyone was alert and ready to enjoy the rides and the sunshine was an added bonus. After the groups were given instructions on meeting times for lunch and advice on timings for departure at the end of the day everyone headed off to enjoy the park. Rides such as Saw, Colossus, Rush and latest stomach churner, The Swarm were sampled and feedback was mixed from ‘terrified’ to ‘no problem!’ After a lunch the groups headed back into the park to enjoy as many rides as possible before meeting back at the coach for 5pm. Once everyone was counted in the coach departed for Lewisham.