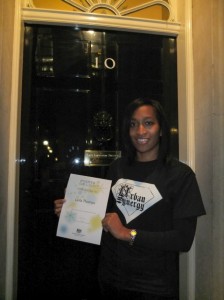 Our founder Leila Thomas is the winner of a new award announced by Prime Minister David Cameron. The Points of Light award recognises outstanding individual volunteers who are inspiring others. Each day, someone, somewhere in the country, is selected to receive the award to celebrate their remarkable achievements.

The organisation has achieved outstanding success; its mentoring and role model workshop programmes have been singled out by schools as contributing to the reduction of exclusions, improved grades and community cohesion. On average, 100 young people attend each of the seminars they run, and thus far, approximately 4,500 have benefited from Urban Synergy.

[quote]Motivating young people with mentoring, work experience and life skills training is a fantastic way to raise their aspirations and keep them focused on achieving their dreams. The work Leila has done in this area is inspiring young people in South East London. She thoroughly deserves this Point of Light award. – Prime Minister David Cameron

I am extremely humbled to receive a Points of Light award, and to be included in a group of such esteemed recipients. Helping young people to reach their full potential is my passion, and to be recognised for the achievements that we, at Urban Synergy, have made, thus far, is truly an honour. – Leila Thomas

I’m delighted to offer my warmest congratulations to Leila not simply for achieving this award, but for the inspirational work that she has undertaken to deserve this well-merited recognition. The problems created by gangs and gang-related incidents is a significant issue right across London but rather that simply shrugging her shoulders Leila decided to try to do something about it and has been remarkably successful. Not only is she truly worthy of this award but also the huge thanks of the wider community and the young people whose prospects she has changed for the better. – Jim Dowd, Leila’s local MP[/quote]