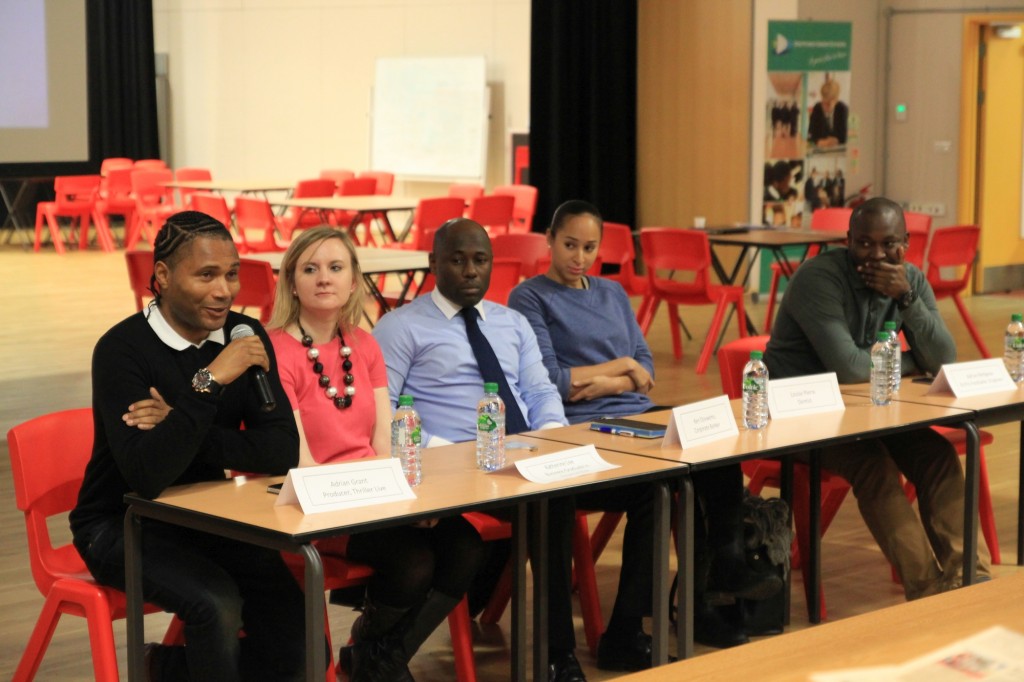 Successful people – including the man who became a friend of Michael Jackson’s and brought the Thriller musical to London’s West End, a former professional footballer, and a young dentist  – came to Deptford Green school to share their experiences with the students.

The eagerly awaited role model seminar, organised by the Urban Synergy charity, took over the main hall for the evening and was attended by many pupils, parents and staff.

There were many inspirational role models from a range of businesses and industries at the event and five of them formed a panel to give a brief outline of their work and answer questions from the audience. The  panellists were Adrian Grant, producer of the Thriller musical; Katherine Lee,a graduate trainee at Thomson Reuters; Ken Osivwemu, an executive at Barclays Bank; Louise Pierre, a dentist;  and Adrian Pettigrew, a former footballer and now an engineer.

Garry Green, a barrister, was the evening’s master of ceremonies and he introduced the panel  with the help of Kojo Boakye, a former student at Deptford Green and currently at university. The first panellist to speak  was Adrian Grant, a theatrical producer who created the hugely successful Thriller musical, “Thriller Live”,  for the London West End stage in 2006.

His message focused on the importance of meeting people and also making the effort to be where you want to be in a few years’ time. He became friends with Michael Jackson after asking him whether he could set up a fanzine in the UK. He said Jackson was his mentor and role model.

When I spoke to Mr Grant after the panel presentation, he told me Michael Jackson was a down to earth person and  very hard working person, adding that Michael Jackson was a “genius with music equipment”.  Mr Grant’s top tips were: “To achieve anything, start yourself.” He also said: “Success isn’t made by the car. You drive it and that is effort.”

Katherine Lee, the second panellist, is on a graduate training scheme at Thomson Reuters, the news and information organisation based in Canary Wharf, with  branches across London. Ms Lee, originally from Coventry, is learning Arabic, learning about technology, cultures and learning how to approach people in a suit.

Her message  is that “Persistence is the key”. At college she took four A-levels whereas everyone else took three – it meant she pushed herself hard. After A-levels, she saved up and went to Australia. She said she “met amazing people and learned the value of money”. After that, she came back to the UK and completed her degree and her master’s degree – working at the same time, because her family could not spare the money to support her with the high costs. Her three top tips for success were “persistency, take risks and work hard”.

Ken Osivwemu, vice president for global cash product management at Barclays Bank, said he had always wanted to be an engineer, but said it was more important to do something you are passionate about. He set himself short term goals and he started working towards them. His top tip was: “Get a balance hanging out with your friends and spending time on your work and also choose a career you are passionate about”.

Louise Pierre is a dentist, working for  Southern Dental in Peckham. She has been qualified as a dentist for seven years. She was lucky to have an ideal mentor, her older brother who was also a dentist. She said “it was invaluable to have a mentor- someone to relate to and help you”. She advised youngsters to work hard consistently and to treat every opportunity as if it was their last. She also said “have no regrets and work hard to improve your weaknesses” and added: “Nothing in life worth having, doesn’t come easy”.

[quote]Always look to the future and keep your options open.[/quote]

The fifth panellist was Adrian Pettigrew, a former professional footballer who is now a senior engineer at Volker-Fitzpatrick, a large UK engineering company. He said he left football because of a mixture of injuries and a lack of opportunities because clubs were reducing the size of their squads of players at the time of the economic downturn. He said switching to engineering was “terrible, horrible” – even though it was an interest of his beforehand.

At school, he had always been best at sport, holding national records. But he had always been encouraged to study as well – which meant that when he switched careers he had his qualifications. He told students: “Always look to the future and keep your options open”.

He was asked how hard it was to study while he was dreaming of becoming a footballer. He said “he directed as much energy and hard work into study as he did into sport”. He said he chose hard challenges such as English Language and English Literature instead of sport sciences. His top tips for the success were to “identify your strengths and weaknesses, and broaden your horizons and develop your interests”. “Have lots of interests”, he said.

The audience then asked the panellists questions.

Adrian Grant was asked “how he found out what he needed to know about launching a magazine?” He replied saying: “For everything you want to learn you can look at YouTube, go to the library or even find mentors to learn from.”

[quote]Set yourself apart from the rest, and you can do this by having wide interests and by volunteering[/quote]

Mr Grant stressed the importance of standing out from the crowd. He said you have to be able to “set yourself apart from the rest. And you can do this by having wide interests and by volunteering” – to demonstrate that you can stand out. He said students should ask what they are doing extra to the others going for the same job that could set them apart. He said London is the centre of the world – everyone wants to come here, but he said this was no reason for Londoners missing out on opportunities because they are all given the opportunity to succeed here.

Katherine Lee said everyone should use every experience they have to find out who they are and to find out what they want to do – and what they don’t want to do. Even if it’s not paid work, it can still be valuable and have value in the longer term.

Then the speed mentoring took place, with students sitting in small groups at 15 tables where they were visited by role models from different professions. They were given about 10 minutes with each role model to ask questions before the role models moved on to the next table. All of the role models were keen to offer their advice and help to the students. One of my friends who came along to the seminar even had the opportunity to go to murder trial, thanks to the help of  a barrister, Courtenay Griffiths.